How To Preserve Habanero Peppers?

Find out how to properly preserve your habanero peppers so that they last longer and retain their flavor. 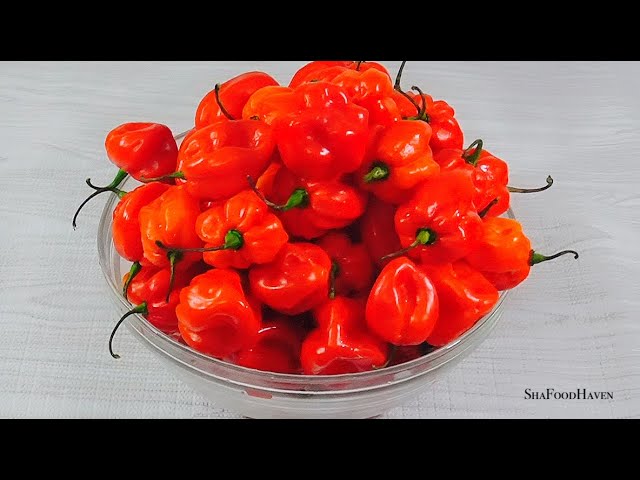 Habanero peppers are one of the hottest kinds of chili peppers in the world. They can be used fresh, dried, or smoked, and are often used in hot sauces and spicy dishes. If you grow your own habaneros, you may want to preserve them so you can enjoy them all year long. There are several methods you can use to preserve habanero peppers.

What You Will Need

Start by putting on your rubber gloves. You will need to be careful not to touch your face while you are handling the peppers, as the oils can cause an intense burning sensation. Next, wash the peppers and remove the stems.

Pour the pepper mixture into a glass jar, cover with a lid, and store in the refrigerator for up to 2 weeks.

Habanero peppers are a type of chili pepper that is prized for its extremely high level of spiciness. If you grow your own peppers, or if you’ve purchased more than you can use fresh, you may be wondering how to preserve them. Canning is the best way to preserve the fresh flavor and heat of these peppers.

Next, sterilize your canning jars and lids by boiling them for 10 minutes.Meanwhile, heat up your canning pot with water and bring it to a simmer. Carefully place your peppers into the simmering water for 3-5 minutes. Remove the peppers from the water with a slotted spoon and place them in the sterilized jars.

Fill the jars with boiling water leaving 1/2 inch of headspace at the top of each jar. Wipe the rims of the jars clean with a damp cloth and apply the lid and screw band. Process in a boiling water canner for 15 minutes. Remove from the canner and allow to cool completely before storing in a cool, dark place.

Habanero peppers can be preserved through pickling. Pickling is a process where food is soaked in vinegar or brine (a saltwater solution) to preserve it. The food is then stored in an airtight container such as a jar, and will last for several months.

First, wash the peppers and remove the stem. Next, cut the peppers into thin slices or strips. In a small saucepan, combine the vinegar, water, sugar, and salt and heat until boiling. Once the mixture is boiling, add the peppers and let them cook for 1-2 minutes. Remove the pan from the heat and let the peppers cool in the liquid. Once they are cooled, transfer them to an airtight container and store in the fridge for up to 2 months.

Habanero peppers can be preserved in a number of ways, but dehydrating is perhaps the easiest method. Dehydrating habanero peppers removes the water content, resulting in a pepper that will last for months, or even years, when stored properly.

To dehydrate habanero peppers, start by washing the peppers and then cutting them in half. Next, remove the seeds and ribs from the peppers using a sharp knife Once the peppers are seeded and de-ribbed, slice them into thin strips.

Arrange the pepper strips on a dehydrator tray and set the dehydrator to 125 degrees Fahrenheit. Dehydrate the peppers for 10-12 hours, or until they are completely dried out. Once dried, store the peppers in an Airtight container in a cool, dark place.

Freezing is probably the easiest way to preserve habanero peppers, and they will last up to a year in the freezer. To freeze habaneros, wash them and then cut into small pieces. You can freeze them whole, but it’s easier to use them if they are already in small pieces. Once they are cut, place them on a cookie sheet lined with parchment paper and put them in the freezer for about 2 hours. Once they are frozen solid, you can transfer them to a freezer safe bag or container.

To keep Habanero peppers fresh longer, store them unwashed in the refrigerator in a plastic baggie with the stem attached. If you plan on using the Habanero peppers within a few days, they can also be stored at room temperature.

Habanero peppers are one of the most popular types of chili peppers, and they are also one of the most versatile. They can be used in a wide variety of dishes, from spicy soups and stews to fiery sauces and marinades. If you grow your own habanero peppers, or if you simply want to keep a few on hand for cooking, it is important to know how to preserve them properly. There are a few different methods that you can use, and each has its own advantages and disadvantages.

-To preserve habanero peppers whole, you can pickle them in vinegar or brine. This will help to maintain their flavor and heat, and they can be stored in this way for several months. However, they will lose some of their crunchiness.
-To preserve habanero peppers for longer periods of time, you can dry them or freeze them. Dried peppers will last for several months, and frozen peppers can last for up to a year. However, both of these methods will result in a loss of flavor and heat.

Habanero peppers are a type of chili pepper that is known for its spicy flavor. If you want to preserve habanero peppers, there are a few different methods that you can use.

One method of preservation is to pickle the peppers. This can be done by boiling water and vinegar, and then adding the peppers to the mixture. The peppers will need to be stored in a cool, dark place.

Another method of preservation is to freeze the peppers. This can be done by chopping up the peppers and then placing them into freezer bags. The peppers will last for several months when stored in this way.

whichever method you choose, make sure to wash your hands thoroughly after handling habanero peppers!