How to Cut an Orange into Wedges

Looking for a quick and easy way to cut an orange into wedges? Check out our step-by-step guide! 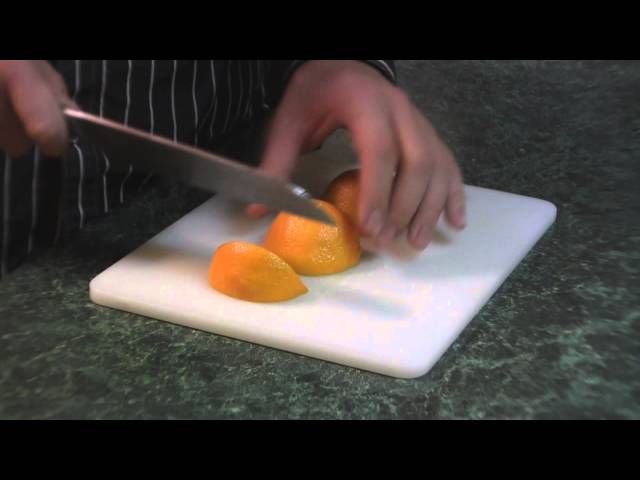 You will also need a cutting board and a sharp knife A serrated knife can be difficult to control and is more likely to slip, so we do not recommend using one for this task.

A sharp knife is the best tool for the job, but a serrated knife will also work. You’ll also need a cutting board

Cutting an orange into wedges is a simple task, but there are a few things to keep in mind. First, choose a ripe orange. A ripe orange will be bright in color and slightly soft to the touch. Second, use a sharp knife A sharp knife will make it easier to slice through the skin and pith of the orange. Third, be careful not to cut yourself. oranges can be slippery, so take your time and cut slowly and deliberately.

Now that you have all of your supplies, follow these simple steps:

Place the orange on the cutting board.

Using a sharp knife, cut off the top and bottom of the orange so that you have a flat surface to work with.

Stand the orange up on one of the flat ends, and slice it in half from top to bottom.

Take one half of the orange, and slice it in half from top to bottom again.

Now take one of the quarters, and slice it in half once more. You should now have 8 wedges.

Repeat with the other half of the orange.

Slice the orange in half, then slice each half in half.

Slice each quarter of the orange into three wedges.

Assuming you’re starting with a whole, unpeeled orange, the first thing you’ll need to do is cut it into quarters. To do this, simply slice the orange in half horizontally, then slice each half in half again. Once you have four quarters, you can move on to the next step.

Next, take one of the quarters and slice it into three wedges. Again, this is a simple process: just slice the quarter in half vertically, then slice each of those halves in half. Repeat with the remaining quarters until you have 12 wedges total.

And that’s all there is to it! Once you’ve cut all the wedges, you can enjoy them as-is or use them in a recipe.

1. Start by cutting off the top and bottom of the orange so that you have a flat surface to work with.
2. Cut the orange in half from top to bottom.
3. Cut each half of the orange into three wedges.
4. Enjoy your orange wedges!