How to Preserve Leeks for Long-Term Storage

Find out how to preserve leeks for long-term storage so you can enjoy them all winter long! 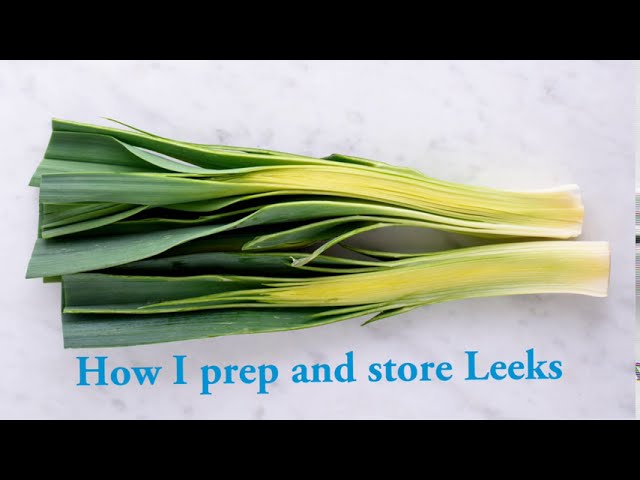 Leeks are a type of onion that is related to garlic, scallions, and shallots. They have a milder flavor than other onions and are often used in soups, stews, and salads. Leeks can be eaten raw or cooked and are a good source of vitamins A, C, and K.

While you can find leeks year-round in most supermarkets, they are in season in the fall and winter. Leeks are relatively easy to grow at home and can be preserved for long-term storage. Preserving leeks is a good way to extend their shelf life and enjoy them out of season.

There are several methods for preserving leeks, including pickling, freezing, and drying. Pickled leeks will last for several months in the fridge and make a great addition to salads and sandwiches. Frozen leeks can be stored for up to a year and can be used in soups or casseroles. Dried leeks can be reconstituted with water and added to soups or sauces.

How to preserve leeks for long-term storage

Leeks are a root vegetable that can be stored for long periods of time, provided they are properly preserved. There are several methods of preserving leeks, including pickling, freezing, and drying.

Pickling is a great way to preserve leeks while also adding flavor. To pickle leeks, simply cut them into desired lengths and then submerge them in a pickling solution. The pickling solution can be made from vinegar, water, and salt, or you can use a pre-made pickling mix. Once the leeks are fully submerged, seal the container and store in a cool, dark place for up to six months.

Freezing is another effective method for preserving leeks. To freeze leeks, cut them into desired lengths and blanch in boiling water for two minutes. After blanching, immediately transfer the leeks to an ice bath to stop the cooking process. Once cooled, drain off any excess water and then transfer the leeks to freezer-safe bags or containers. Leeks frozen in this manner will last for up to one year.

Drying is a third option for preserving leeks. To dry leeks, slice them thinly and then spread out on a dehydrator tray. Set the dehydrator to 135 degrees Fahrenheit and dry until completely brittle; this can take anywhere from four to eight hours depending on how thinly the leeks are sliced. Once dried, store in an airtight container in a cool, dark place and they will last for up to six months.

The best way to store leeks

Leeks are a type of onion, and they can last for several weeks if stored properly. However, if you want to store them for longer periods of time, you’ll need to take some extra steps.

First, you’ll need to clean the leeks thoroughly. Cut off the root end and the dark green leaves, and then peel away any loose outer layers. Rinse the leeks under running water, and then slice them into thin pieces.

Next, you’ll need to blanch the leeks. Boil a pot of water and then add the leek slices. Cook for two minutes, and then remove them from the pot with a slotted spoon. Immediately place them in a bowl of ice water to stop the cooking process.

Once the leeks are cooled, drain them well and pat them dry with paper towels. Place them in a freezer-safe bag or container, and seal it tightly. Label the bag or container with the date so that you know how long they’ve been stored.

When you’re ready to use the leeks, thaw them in the refrigerator overnight. You can then use them in any recipe that calls for fresh leeks.

How to keep leeks fresh

To keep leeks fresh, trim the root end and any wilted leaves. Cut the leek in half length-wise, then cut it into pieces that are about 2 inches long. Rinse the leek pieces thoroughly under running water to remove any dirt or sand.

How to store leeks in the fridge

Assuming you have already harvested the leeks, clean them thoroughly. To do this, cut off the root end and the dark green leaves, leaving only the white and pale green parts. Cut the leeks in half lengthwise and rinse them under cold water, making sure to remove any dirt or sand that might be hiding in between the layers.

Once they are clean, you can store leeks in the fridge by wrapping them in a damp paper towel or placing them in a perforated plastic bag. Make sure to store them in the crisper drawer so they don’t dry out. Leeks will last about a week stored this way.

How to store leeks in the freezer

To freeze leeks, wash them thoroughly and slice them into thin strips. Place the strips on a baking sheet lined with parchment paper and freeze for about two hours, or until solid. Once frozen, transfer the leeks to a freezer bag and label with the date. Leeks will keep in the freezer for up to six months.

How to blanch leeks

Proper blanching is an essential step in preserving leeks for long-term storage. Blanching stops the enzymes that cause color and flavor changes, while also precooking the leeks to ensure that they will be tender when eaten. To blanch leeks, trim off the root end and any brown or yellow leaves. Cut the leeks into thirds, then wash them thoroughly under running water.

Bring a large pot of water to a boil, then carefully add the leeks. Cook for three minutes, then remove from the heat and immediately transfer the leeks to a bowl of ice water. Once cooled, drain the leeks and pat dry with a paper towel. Place the leeks in a freezer-safe bag or container, then label and date it before freezing. Leeks can be stored in the freezer for up to six months.

How to pickle leeks

Pickling leeks is an excellent way to preserve them for long-term storage. The pickling process helps to keep leeks fresh and crisp, while also infusing them with flavor. To pickle leeks, you will need:

Trim the root end and the green leaves off of the leeks, then cut them into approximately 2-inch pieces. Wash the leeks thoroughly to remove any dirt or debris.

In a large pot or canning jar, combine the vinegar, water, salt, sugar and spices (if using). Add the leeks to the mixture and stir well to combine. Place a lid on the pot or jar and refrigerate for at least 24 hours before using.

How to dehydrate leeks

Dried leeks are a handy ingredient to have on hand in your pantry. They add a mild onion flavor to soups, stews, and rice dishes, and they rehydrate quickly. Dehydrating is an easy way to preserve leeks for long-term storage.

To dehydrate leeks, wash them thoroughly and slice them into thin strips. Spread the strips out on a dehydrator tray and set the dehydrator to 125 degrees Fahrenheit. Dry the leeks for 12-24 hours, or until they are completely dried out and crisp. Store the dried leeks in an airtight container in a cool, dark place.

If you’re lucky enough to have an abundance of leeks, you may be wondering how to preserve them for long-term storage. There are a few different methods you can use, depending on what you plan to use the preserved leeks for.

One of the simplest methods is to pickle the leeks. This is a great option if you want to use them as a condiment or topping for other dishes. To pickle leeks, simply slice them thinly and add them to a jar or container along with vinegar, water, salt, and spices of your choice. Allow the mixture to sit for at least 24 hours before using, and store in the fridge for up to 2 months.

Another option is to freeze the leeks. This is a good choice if you want to use them in cooked dishes, as they will still retain their flavor after being frozen. To freeze leeks, wash and chop them into desired pieces, then spread them out on a baking sheet and flash freeze for 1-2 hours. Once they’re frozen solid, transfer them to a freezer bag or container and store in the freezer for up to 6 months.

If you want to use your preserved leeks in recipes that call for fresh leeks (such as soups or stews), either of these methods will work well. However, if you want to fry or roast your leeks (for a delicious side dish), it’s best to freeze them first so that they don’t collapse when cooked.