How to Preserve Cucumbers for Long-Term Storage 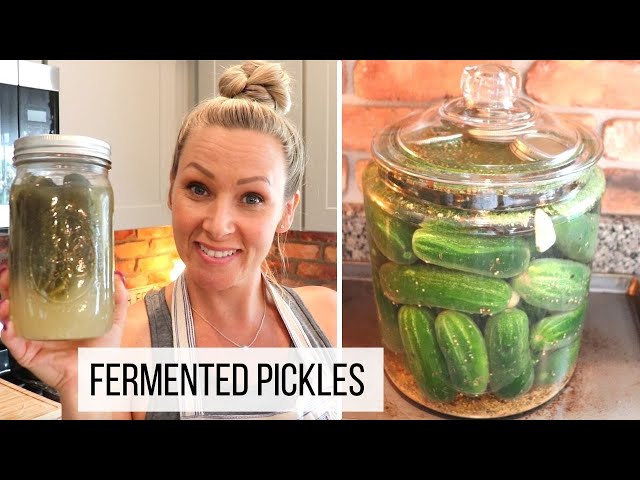 Cucumbers are a versatile vegetable that can be used in a variety of dishes, from salads and sandwiches to relishes and pickles. They are also a good source of vitamins and minerals, including vitamin C, potassium, and magnesium.

While cucumbers are available year-round in most grocery stores, they are typically in peak season from June to August. This is when they are the freshest and have the best flavor. If you want to enjoy cucumbers all year long, you can preserve them for long-term storage.

There are several methods for preserving cucumbers, including pickling, freezing, and dehydrating. Each method has its own benefits and drawbacks, so you will need to decide which one is best for you based on your needs and preferences.

Pickling is a popular method for preserving cucumbers because it is easy to do at home and does not require any special equipment. Pickled cucumbers will last for several months in the refrigerator. However, they will lose some of their crunchiness over time and may take on a strong vinegar flavor.

Freezing is another easy way to preserve cucumbers. Frozen cucumbers will last for up to a year in the freezer and can be used in many of the same ways as fresh cucumbers. However, they may become mushy when thawed.

Dehydrating is a more time-consuming process than pickling or freezing, but it produces cucumbers that can be stored indefinitely. Dehydrated cucumbers will retain their crunchiness and can be rehydrated with water when needed.

How to pick cucumbers for preservation

Cucumbers intended for storage should be free of blemishes, cuts, and bruises. The skin should be prickly to the touch. If the cucumber is too ripe, it will likely develop soft spots, mold, or become mushy. Cucumbers that are too immature will be sour and tasteless.

What type of cucumbers preserve best?

Cucumbers are a type of fruit that belongs to the gourd family. It is typically green in color and has a long, cylindrical shape. Cucumbers are mostly water but also contain vitamins A, B, and C as well as minerals such as potassium and magnesium. This article will focus on how to preserve cucumbers for long-term storage.

To ensure your cucumbers preserve well, it is important to start with fresh cucumbers that are unblemished and have been properly ripened. It is also important to follow proper food safety guidelines when handling and preserving cucumbers.

How to clean cucumbers for preservation

Cucumbers are a summertime staple in many households, and while they can be enjoyed fresh year-round, they are at their peak during the warm months. If you find yourself with an abundance of cucumbers, you may be wondering how to preserve them for long-term storage.

The key to preserving cucumbers is to clean them thoroughly before pickling or canning. Begin by washing the cucumbers in cool water, then scrubbing them with a brush to remove any dirt or debris. Next, slice the cucumbers into thin pieces, discarding the ends.

To can cucumbers, begin by boiling a large pot of water. While the water is boiling, sterilize your jars and lids by submerging them in the boiling water for at least 10 minutes. Remove the jars and lids from the pot of boiling water using tongs or canning tools, then fill each jar with sliced cucumbers, leaving about 1 inch of headspace at the top of the jar.

Next, pour boiling water over the cucumbers in each jar until they are covered and there is still 1 inch of headspace remaining. Add 1 teaspoon of salt per quart jar (or 1/2 teaspoon per pint jar), then screw on the lid and ring until fingertip tight.

Place the jars back into the large pot of boiling water, making sure that they are covered by at least 1 inch of water. Boil for 10 minutes, then remove from heat and allow to cool for 24 hours before storing in a cool, dark place for up to one year.

How to slice cucumbers for preservation

How to blanch cucumbers for preservation

Cucumbers are a tender, warm-weather crop. They are usually eaten fresh and are at their peak flavor when they are harvested. You can extend the cucumber season by pickling them, but you first need to blanch the cucumbers to preserve their flavor and texture.

Blanching is a process of scalding vegetables in boiling water to set their color, crispness, and flavors. It also deactivates enzymes that would otherwise cause the vegetables to become mushy or discolor during storage.

Here is a step-by-step guide on how to blanch cucumbers for long-term storage:

1. Fill a large pot with enough water to cover the cucumbers. Bring the water to a boil over high heat.

2. While the water is heating up, prepare an ice bath by filling a large bowl with ice cubes and cold water.

3. When the water is boiling, add the cucumbers and let them cook for 2-3 minutes.

4. Use a slotted spoon to transfer the cucumbers from the boiling water to the ice bath. Let them cool for 1-2 minutes.

5. Remove the cucumbers from the ice bath and pat them dry with a kitchen towel or paper towels.

6. Place the cucumbers in airtight containers or jar them for long-term storage in the fridge or pantry.

How to pack cucumbers for preservation

Packing cucumbers in a fermentation crock is an ideal way to store them for long-term preservation. Fermentation crocks are designed to provide an anaerobic environment, which is necessary for the pickling process. Cucumbers should be packed tightly into the crock, leaving no more than 1/2 inch of headspace at the top. Once the cucumbers are packed, add a brine solution made of 2 tablespoons of salt per gallon of water. Weight the cucumbers down with a plate or other heavy object to keep them submerged in the brine. Cover the crock with a lid or cloth and allow the cucumbers to ferment for 3-4 weeks before eating.

How to store cucumbers for preservation

Cucumbers are best stored in cool, dark, and dry conditions. The ideal temperature for storing cucumbers is between 50 and 60 degrees Fahrenheit.

If you have any questions about how to store cucumbers for the long term, please contact your local extension office for more information.

Cucumbers are a versatile summer vegetable that can be used in salads, sandwiches, and many other dishes. If you have a bumper crop of cucumbers from your garden, you may be wondering how to preserve them for long-term storage. Here are a few tips:

-Pickle them: This is perhaps the most popular way to preserve cucumbers. You can make sweet pickles, sour pickles, or dill pickles.
-Dry them: Cucumbers can be dried and used as a crunchy topping for salads or soups.
-Freeze them: Another option is to freeze cucumbers. This is a good option if you want to use them in smoothies or other cooked dishes.

With these tips, you can enjoy your cucumbers all year long!

If you’re new to canning or if you’ve had difficulties in the past with preserving cucumbers, this guide will help you troubleshoot the most common problems.

Canning cucumbers is a simple process, but there are a few things that can go wrong. Here are the most common problems and how to fix them:

1. Cucumbers turn brown This is usually caused by over-processing. To prevent cucumbers from turning brown, remove them from the canner as soon as the processing time is up.

2. Cucumbers are mushy: This problem is usually caused by under-processing. To make sure cucumbers are properly processed, follow the recommended processing time for your altitude.